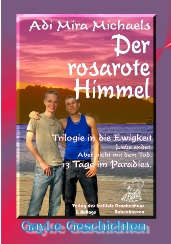 Trilogy of eternity: Love ends. But not with death.

This novel has appeared in 2 versions:

"Turkish Delight" is the G-rated edition (but it is still gay!)

Aydin and Chiron - a couple as it cannot be more unequal. Aydin, the slender German-Turk, student of photography and Chiron, a four-edged, angular nurse. They meet for the first time where you meet, if one is nurse in a hospital.

Aydin was severely beaten up and hurt, transferred to the clinic, and Chiron was assigned to him as his nurse.

Quickly develops a friendship, growing to love by the time. Not in a sexual way – with that many tubes and injuries, Aydin could do nothing –  but from the heart. They soon move together and experience some cheerful, peaceful years in a northern German city.

The perpetrators who had done this to Aydin were quickly identified, arrested and sentenced. In prison, they had been "liked" like other fresh meat too... Their hate and grudge grows – but grudge on Aydin, not on themselves.

After prison the hate changes again into violence, this time Aydin does not survive. After six months in agrypnocoma the machines are switched off.

Chiron is not only desperate, he himself  is 'dead'. Working only mechanically, one evening he received an 'order' from their common Dutch friends to travel to them without delay, to take a break.

He follows the command and his life gets a new twist.

The medium Margaret from Amsterdam represents for him a connection to the other side of life. (Attention: it's not a drug story!)

* Kindle direct: five us your Kindle-Mail-Adress (you get it free from Amazon) and your eBook will be delivered in a only few hours!